​The Accelerate25 Lead Team have welcomed Provincial Growth Fund (PGF) announcements for the Horizons Region made today by the Regional Economic Development Minister, Hon Shane Jones.
​Accelerate25 Lead Team Facilitator and Horizons Regional Council chief executive Michael McCartney  says since the launch of the initial Economic Action Plan in 2016 the region has continued to go from strength to strength.

“While we have seen success in some of our initial areas of focus, over the past three years new opportunities have arisen.

“Today’s PGF funding is timely as a refresh will enable us to focus on where are future efforts are best spent.

Accelerate25 programme director Craig Nash says one of the new initiatives recognised by the PGF is bio-forestry – a world-leading technology that will create biodegradable, compostable and renewable products from under-utilised forestry resources.

“This alternative to petroleum-based plastic products will be a New Zealand first, and has been supported by the PGF with $380,000 to research commercial production of bio plastics in the Horizons Region,” says Mr Nash.

“A national study, involving 11 case study farmers who had been running systems for at least 18 months revealed farmers on average experienced an Internal Rate of Return of 53 per cent,” says Mrs Dew-Hopkins.

“While the impact on the bottom line is a primary focus, uptake of stock water reticulation in the Manawatū-Whanganui Region will allow for better environment management and animal welfare, including lessening the impact of drought and keeping stock out of waterways.”

In addition to central government’s $120,000, the water reticulation project is being supported by a further $60,000 from Rangitīkei District Council, and $10,000 from Horizons Regional Council.

While in Palmerston North, Minister Jones also received an update on KiwiRail’s Regional Freight Hub which received $40 million from the PGF last year. 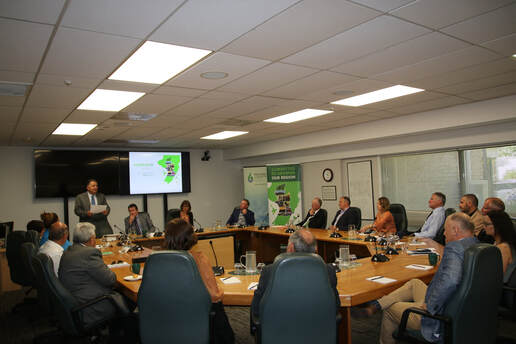 “This world class facility will improve freight efficiency and connectivity while supporting the management of the country’s growing freight volumes. At the same time it will reduce transport emission as each tonne of rail freight has 66 per cent fewer carbon emissions compared to road.

“The regional freight hub builds on Accessing Central New Zealand, a subgroup of Accelerate25, focused on improved integrated multimodal air, road, and rail networks to accelerate exporting from our region to domestic and international markets”.

“Under Accessing Central New Zealand, the region has also been successful in progressing a Regional Freight Ring Road around Palmerston North City, which aligned with the Regional Freight Hub, is an integral part of helping our region prosper.”