​Accelerate25, the programme behind the Manawatū-Whanganui Economic Action Plan, and Horizons Regional Council have won the Collaboration Award at the Inaugural Ministry of Business, Innovation and Employment (MBIE) Awards for their innovative approach to implementing a complex long term programme. 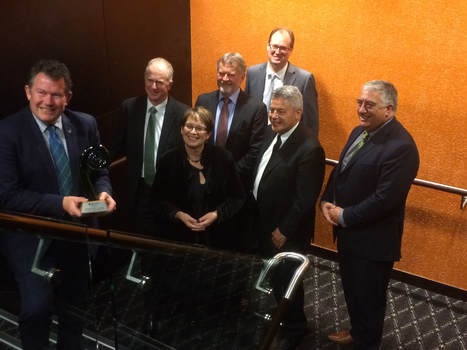 The initiative won the attention of the Awards panel because of its strong and tangible commitment to collaboration, evidence based planning and multi skilled team work.

​Accelerate25 is a regional economic growth programme which aligns people, policy and funding in priority areas to drive growth and create a more prosperous Manawatū-Whanganui by 2025. Led by a governing Lead Team representing business, iwi, local and central government, Accelerate25 involves a broad spectrum of groups from across the whole Region.
​
Accelerate25 Lead Team representatives were presented with the Collaboration Award on the evening of 31 August, at a gala awards dinner in Wellington. The awards are sponsored by MBIE and hosted by Economic Development New Zealand.

Accelerate25 were not the only winners on the night, with Ruapehu District Council, Visit Ruapehu and a consortium of specialist consultants, led by Henley Hutchings receiving a commendation award in the same category for the creation of the ‘Ruapehu Regional Visitor Sector Development Plan and Destination Value Proposition’. The tourism and visitor services opportunity project has resulted in a refreshed destination proposition statement and brand for the Ruapehu district.

Accelerate25 Lead Team facilitator and Horizons Regional Council Chief Executive Michael McCartney is thrilled that both projects have been recognised on a national stage.

“These awards recognise all of the hard work that has been going on over the past few years by a number of groups and organisations across the whole Manawatū-Whanganui region. We have developed an Action Plan which is the blueprint for economic development in our region, sourced considerable funding from central government and have been the enabler for a number of key projects to improve regional prosperity,” he says

“It is also incredibly timely, because as of this month the Manawatu-Whanganui Economic Action Plan has been in place for one year.”

Accelerate25 and Horizons Regional Council were nominated for the award by the Central Economic Development Agency (CEDA).

“We believed Accelerate25 was worthy of an award due to complexity of the programme, the number of stakeholders involved and the successes so far,” says Linda Stewart, Chief Executive of the Central Economic Development Agency (CEDA).

Since then a number of key milestones have been achieved. These include:

The Action Plan, along with in depth information on each opportunity and enabler can now be viewed on the new Accelerate25 website, www.accelerate25.co.nz.